Posted on Thursday, May 24, 2018 By Garvey McDevitt tagged Mexico

For many years, Mexico has developed a negative reputation with Americans, which may discourage travel to Mexico. Maybe it’s the news and social media outlets that are skewing our view of our southern neighbor. Movies and TV shows that play on Mexican stereotypes have impacted our perceptions, I’m sure. Perhaps past generations have passed down these biases and we just blindly accept them. Regardless of how they came about, everyone you ask has heard of at least one negative stereotype about Mexico, whether it be about the people, the culture, the political or economic state, or even the geography. Well folks, we’re going to amend the pop culture. Mexico is more than the stereotypes that surround it, so we have taken on the task of dispelling some of the most popular myths associated with the country.

It is likely these misconceptions are perpetuated by people who have never visited Mexico. Let's set the record straight, shall we?

In fact, many Mexican citizens speak English, and very well.  In larger cities (and small cities and towns, as well) English is taught in primary and secondary schools, and certainly in all universities. No matter where you travel in Mexico there will be local inhabitants who speak English, even if just a little, and are eager to meet travelers such as yourself.

"Party too much/drink too much tequila"

You will find people everywhere who may imbibe a little too much, but Mexicans, as a population, are hard-working, upstanding members of their society, and not alcoholics. In fact, there are artisan tequila and mezcal distilleries producing very high-quality sipping liquors.

You will likely only see Mexican wearing sombreros and ponchos at folkloric shows…where they will likely be demonstrating what fabulous dancers they are.

"You will only hear loud mariachi or norteño music"

Mexican music is diverse and multi-cultural. Various styles include: traditional folk, pop, rock, Son, Corrido, Ska, as well as Opera and Classical; and you will hear the music and see locals dancing to it wherever you go. Sitting at a café listening to a mariachi band or norteño group can be fun as well. Any visit to Guadalajara should include an attendance to the renowned Jalisco Philharmonic Orchestra.

"They only eat tacos, enchiladas and burritos"

Mexican cuisine is very misunderstood.  If you don’t believe me, ask Rick Bayless.  Contrary to popular American belief, Mexican cuisine, like many other countries, is regional, and bears little resemblance to the foods served at many “authentic” Mexican or “Tex-Mex” restaurants in the U.S (not that there’s anything bad about that). Outside of major metropolitan cities with large Latino populations, that is.  In Mexico (except Cancun and Baja), nachos, overstuffed burritos, gloppy “refried” beans, quesadillas, sizzling fajitas and greasy fish tacos are hard to find.

Here are a few of the primary regional cuisines:

"All Mexican food is spicy"

Chilies are widely used but not all are hot and many dishes are mild.

"I’ll get “Montezuma’s Revenge” for sure"

You can get sick anywhere.  With safe precautions you will stay healthy in Mexico: wash your hands regularly, drink only bottled (sealed, tamper-proof) or purified water, dine at clean restaurants, pick street vendors carefully and eat only freshly cooked hot foods, avoid pre-cut raw fruits and vegetables (salads) unless served in an upscale restaurants or you buy whole and cut yourself. Most high-end hotels and resorts, as well as upscale restaurants, only use purified ice.

A specialized food tour of Mexico will enlighten many a traveling ‘foodie’.  Consult with one of our Mexico specialists who will help design a custom food tour. 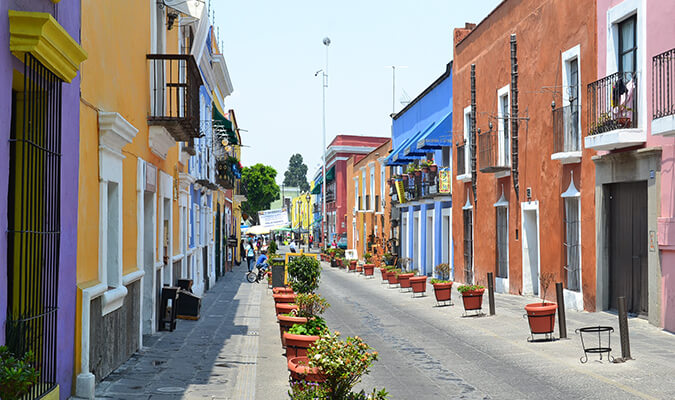 "The big cities are polluted"

Not necessarily. Yes, Mexico City and Guadalajara are experiencing serious air pollution, like many other world cities (see: Beijing, Delhi, Istanbul), but spending just a few days will not ruin your vacation, or your health.

"Rural villages are poor and dirty"

Many small cities and towns are quaint, clean and home to friendly local folks.

Cancun, Acapulco, Puerto Vallarta, Cabo San Lucas are popular for several reasons:  good weather, beautiful beaches, fun nightlife and plenty of action.  Throngs of college students only disrupt for a few weeks every spring.  For the rest of the year, you will find mostly other vacations and merry-makers eager for a fun time.

"It's really dangerous / there's a lot of crime and drugs"

Like many countries (including the U.S.), there are unsafe areas, specifically certain neighborhoods in larger cities and cities on the U.S. border; but overall, Mexico is a very safe country. Millions of visitors travel to Mexico safely each year, although there are cases of petty crimes anywhere. Common sense and a few precautions go a long way.  Avoid walking alone at night, don’t carry valuables (leave them at home) or keep them secure (pickpockets can be anywhere).  Your tour guides and hotel staff can be an invaluable source of information.

They say you shouldn’t judge a book by its cover. In this case, you shouldn’t judge a travel destination based on skewed or biased perceptions perpetuated by people who’ve never even been there. We strongly encourage relying on personal first-hand experiences. So don't accept the false depictions, go experience the reality of Mexico. And who knows, you might just bust some myths of your own!

Click here and speak with a Lost World Adventures consultant who will help you plan your trip to Mexico.